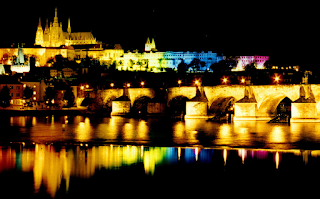 Formerly united, the states of Czech and Slovakia are hosts to the next two events in my tournament schedule. One again I will be in uncharted territory as I head off to Bratislava and Prague for the first time. I am seeded in both these small events in a strong field of players led by the top seed, Czech national champion and world no.42 Jan Koukal. Training has been excellent and I travel to these events with increased confidence. Apart from the Squash, I also look forward to visiting these two historic countries in hope of finding time to absorb their history and culture during my ten days trip from 15 to 25 December.


23/12/11 - The Final
If you've worked hard for a long time in training and throughout the tournament and got to the final and then totally control a game and lead 10-7 and then ... lose that game to go 0-2 down, you probably don't deserve to win. However, if you forget about the previous games, re-focus, work hard and keep fighting and lead 10-8 and then ... lose the game again - you definitely don't deserve to win.

Forutnately, its not the end of life. Let's enjoy Prague!

19/12/11
The four hour train journey from Bratislava to Prague passed quickly with the Squash boys. On arrival we caught a taxi from the train station straight to the hotel and got settled in quickly. Eager to see the much anticipated city, we set off to the town centre to have a look around. The thirty minutes trip was easy and economical and we were in the heart of town. Coming out of the underground stop of Muztek, we were staring at the beautiful National Museum building. The main street of the square looked magnificent at night. We also saw a lot of candles and people gathered together to mourn the death of an ex president and popular political figure the day before. We took a walk into the old town finishing at the old town square which looked fascinating - I was captivated by Prague.

20/12/11
The Squash Squash Club Praha is located within a ten minutes' walk from the hotel. It is a great multisport facility with a lot of history. I had a good practice hit which gave me a good feel of the court. The panel courts are slower but it's going to be hot and bouncy when the temperature rises with the crowds coming in. The tin seems higher than the 19 inches it's supposed to be which will make for longer match times. All this and much more needs to be looked into when formalising a game plan.

Later in the evening, local Squash star Jan Koukal took us out for dinner at his favourite restaurant and a scenic drive around the city. Prague is amazing! The architecture and the preserved Old Town with all it's streets and road, with the river, the bridge and the castle (main picture) are absolutely breathtaking. On top of all that, the public transport is great and eating out is very affordable. I look forward to exploring more of the city once the squash is finished.

21/12/11
The Squash started for me today as I got past travelling buddy Robbie Downer in 4 games. Robbie played well but I guess experience prevailed in the end.

After dinner back at the hotel, the organiser couple Ondrej (also a PSA member) and Vanda took us out for another scenic trip of town. Both of them had thorough knowledge of local history and both Frank Hartkoren and I were impressed. As much as Ondrej knew, he was still unaware of the local trams stopping in the middle of the road as he braked all of a sudden - 24 years and still learning about his city! Overall we had a great time - thanks a lot guys!
22/12/11 With both the quarter and semi final matches being played today and with the first match starting at 10, it was going to be an early and long day.  I played Czech no.2 Petr Martin in the quarters. In the first rally of the match my back seized up all of a sudden. It felt tight, restricted and sore. After the initial shock I took time to stretch a bit and tried to avoid moving to the front which seemed very hard. My opponent seemed more like a shot player and with signs of me struggling he attacked as much as he could. A few winner and a few errors from both of us and luckily I took the first game. I had a stretch in between games but it didn't seemed to help the cause. I went on with the same strategy and helped by petr's errors and some of my desperate winners I took the match in 3. It was frustrating to not be able to get a physio nor massage appointment anywhere. I improvised and did the best I could with a warm bath, icing, stretching, pain killers and some volatren thermo pads. By the time of the semi, I felt better but not great. In the semi I was up against the talented youngster Lucas Serme of France. The second seed in my half, Brad Hindle had to withdraw due to a niggling hip with made way for Lucas to get through after beating Andre and Ondrej. The match started well but I struggled with my back. I took the very important first which was a confidence booster and my back loosened up well. I was down in the second by a couple of points but did well to win that one to go 2-0 up. I could see he was drained after all the work. However, I relaxed a bit mentally and the work affected me as well. He caught a sniff and did well to win the third and pushed hard to win the fourth. I changed tactics in the 5th and played my natural game mixing short and long very well to take the final game 11-3. It was a 70 minute match and recovery would be the key to have a good final against the capable top seed Jan Koukal.

Imet Open
Bratislava 16-19 December
My Czech Airlines flight from Amsterdam to Bratislava was cancelled as they decided to cease this route even though bookings had been made and paid for. However, they offered good service to the ones affected and we were offered flights to Prague or nearby Vienna. I thought about my options and after getting in touch with a couple of local players I decided to fly to Vienna. Good friend, Austrian Squash player Aqeel Rehman would be driving through Vienna on his drive from Salzburg to Bratislava and was kind enough to offer to pick me up on the way. Looks like we have a short but interesting roadtrip on the cards.
The Tournament
They say small tournaments are usually the best and it certainly proved true in the case of this event in Bratislava. There was great atmosphere at the cozy Squash club. There are many people working with the tournament and I got the key to my room through one of them. We have been put up in the newly bit apartments just above the squash courts which is so convenient. Players were treated to lunch, drinks and local desserts. In the evening the club hosted a wonderful welcome party with more food and entertainment with professional singers and dancers. There was also some fun games for the players including dancing with the pros! Overall, a great start to the event - only if every tournament was like this.

However the result didn't go my way. After clearing the first two rounds against much younger Welsh and Swiss opponents, I met Aqeel in the quarters. Aqeel played some good Squash and stretched me all the way. After a bad first game, I recovered to take the next two and had matchballs in the fourth. He hung in there to save them and take the game to a tie break. I was lucky to win the last two points and avoided the match to go to the fifth game.

In the semifinal I was up against the in form Steve Finitsis. I felt I played and controlled the game well but errors at crucial stages of each game cost me badly. He capitalised on my mistakes and played well to avoid me getting into the match as I went down in 3 games in 44 mins.

Even though the loss hurts, I am not too disappointed with my performance. I know that I have my rhythm back and just need to persist and remain focused. After thorough analysis of the matches, the attention and energy needs to be directed to the next tournament which promises to be another good event. I look forward to Prague.

To be updated regularly through the trip.

Life after being a a squash professional seemed uncertain. Who am I, if not an athlete? What are my skills? What would I do for a liv... 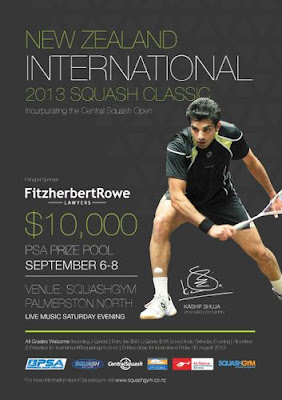 kashifshuja
A former professional squash player, high performance coach and manager, Kashif is a family man striving to get the best out of life for himself, family and the community. He lives in Taupo, New Zealand and works at the local squash club.